As today recognized as the first programmer in history, and yet coming from a 19th century where women were still largely excluded from scientific work, Ada Lovelace remains undoubtedly one of the emblematic figures of women’s representation and participation in the digital industry. 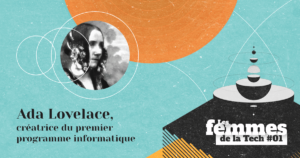 The pivotal and noteworthy events in the life of Ada Lovelace

The field of computer science may have never benefited from the crucial contributions of Ada Lovelace. Her life hinged on a pivotal event that occurred just a few months after her birth in December 1815: her mother, Annabella Milbanke, left Ada’s father, the British poet Lord Byron, in order to keep her daughter away from the artist’s wish to raise his daughter in an artistic environment. Instead, she provided Ada with her first lessons in mathematics, which were later complemented by tutors.

At the age of 17, Ada met Mary Sommerville, a renowned researcher who introduced her to Charles Babbage, the future father of modern computers. It was through Babbage’s most ambitious project, the Analytical Engine, that Ada made her mark on the history of computer science.

Ada Lovelace’s contribution to the field of computer science.

Today considered as the first modern computer, the Analytical Engine obtains data and instructions through a sequential reading of punched cards. In 1842, Federico Luigi Menabrea, an Italian mathematician, described its operation in an article… translated by Ada!

This was a significant first contribution by the young woman, but certainly not the only one. Ada Lovelace is most remembered for the addition of several notes to this translation, including one that is considered the first algorithm in the history of computer science that could be executed by a machine. Another key contribution: she created a program for calculating Bernoulli numbers.

Ada Lovelace’s legacy lives on in the computer programming language, ADA, which was named after her. Initially developed by the US Department of Defense, it is now used in various industries such as transportation, automotive and aerospace. Ada’s impact is not limited to the field of computer science, her life and work have been celebrated in popular culture as well. The 1997 film ‘Conceiving Ada’ starring Tilda Swinton, is an example of the enduring interest in her story.