Laval Virtual And Vr Shine In Our Students’ Firmament

Virtual Reality, VR, or RV in French for Réalité Virtuelle, is finding its way out of R&D laboratories. The general public is beginning to adopt it almost naturally, notably through the world of video games. Google and other manufacturers of VR headsets for smartphone applications, not to mention numerous startups, are investing the market, including Hypersuit in France. Our students are also fans, both at the Epitech Innovation Hub as well as when it comes to showing their projects at dedicated events, in particular at the oldest and most important of them all, Laval Virtual.

As its name implies, Laval Virtual is dedicated to Virtual Reality and this event has grown considerably since its creation almost 20 years ago – France is indeed a leader in the field and this small town of Mayenne has made it its specialty. This 19th edition, which took place last March 22 to 26, beat attendance records; during the single weekend open to the general public, 9800 visitors turned out, with a total of 17,000 over the 5 days, the first 3 being dedicated to professionals. 5 Epitech student projects were exhibited.

The small world of technologies

“Laval Virtual”, resumes Jérémy Andrey (class of 2017), “is awesome. For example, we were able to meet the lab staff from Nvidia Seattle, who demonstrated their new innovations, including a custom HTC Vive, which enables you to multiply pairs by 3… These guys were Nvidia researchers and they were quietly chatting with us – I went straight into fanboy mode! It was really great. Of course, I took their cards and they sent me their research papers. Interestingly, Roger Lewis (class of 2017) who was with me, did computer graphics at UCSD (University of California, San Diego) with a professor that one of the people on the Nvidia team knew really well… It’s a small world.”

Rennes and Nantes in Laval

2 Epitech Rennes projects and 3 from our school in Nantes occupied the Epitech space at Laval Virtual 2017. Jérémy confirmed that it was the “VR-racer project that attracted the most attention…” Demo video of the reasons for the success of VR-racer, which we will talk about again below.

This video game “peripheral” with its very “maker“ spirit from Epitech Nantes was not alone in Laval: MRinside and AR-blackboard were also presented. As for Rennes, the TyHome and Kemdro projects were presented by their project managers. 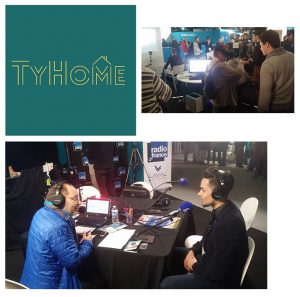 Happy to have been interviewed by Radio France Bleu Mayenne (“We’ve had a lot of contacts and good feedback since this show”), Rodolphe Dugueperoux (class of 2019) summarizes TyHome, which was validated as a 2019 Epitech Innovative Project: “It consists of virtual reality software for professionals of interior architecture that enables their clients to view the area that they want to develop via an HTC Vive or Oculus Rift headset. The client can thus move through the area, choose the furniture, move, open, activate and change the textures and colors and have access to the description of each piece of furniture. A true customer service and a real advantage to stimulate sales…” 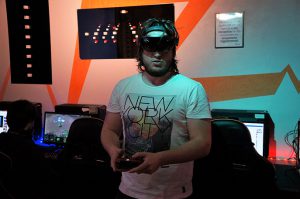 According to François Colin (class of 2019), “Kemdro is a multiplayer video game for HoloLens and smartphone using augmented reality and geolocation to bring together people in everyday life, the purpose being to create social interaction between players. Alone or in a team, they can create a dungeon composed of several rooms, traps and monsters, and then install them wherever they wish in the real world, by going to the specific place.”

The children of today will live in VR tomorrow

“More specifically”, he adds, “we presented our first prototype at this fair: a dungeon that you can install wherever you like and that you can explore alone thanks to the HoloLens and an Xbox One S joystick. The feedback has been very positive (…) a young girl spent at least 15 minutes trying to catch the final boss of our demonstration dungeon with her hands instead of using the joystick. We didn’t know if she was afraid of it or having fun and I have to admit that it bothered us, but her parents were laughing a lot and she even came back later in the day to try again… It shows that she enjoyed it”. 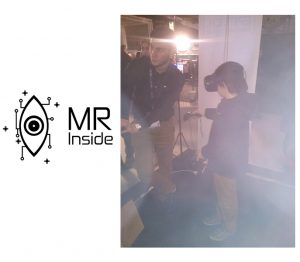 One of the two other projects from Nantes, MRinside, also wants to cross virtual and augmented realities. Under the guidance of Kévin Pichot (class of 2013 and Epitech pedagogical assistant), Gilles Geunis (class of 2019), Jeremy Jouvance (class of 2020), Pierre-Marie Danieau (class of 2019) and Thomas André (class of 2019) adopted an Epitech educational project, the “R-type”, by “pushing it further with the HTC Vive”, says Jérémy Andrey, “the players are no longer on a single plane but in a 3D world avoiding enemies. To go even further, the additional idea was to give this player the possibility to get help from others around him or her, who play on a touch pad. That is how we get to mixed reality, where the other players can pull things from outside the system to help the one who is playing in 3D…” 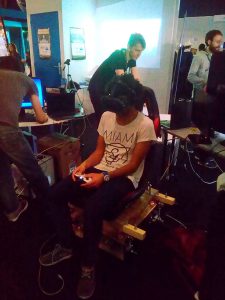 From one video game to another, “the idea of the VR-Racer seat”, summarizes Jeremy, “which I worked on with Aymeric Fouchault (Epitech Nantes Director of Studies) and that we made together with a lot of students in turn, was to simulate a car seat. It works with a SIM tool, which allows us to interface games with the seat. This tool searches the video game memory for the position, speed and forces that enable the seat to move, so for us it was ‘simply’ a matter of connecting everything together”.

“The idea behind this seat”, continues Jeremy, “is that the students can now create games and interface them with the seat. VR Racer is a tool that is available to all those who want to have fun with it. For Laval Virtual, we interfaced it with a Formula 1 game – a little like in the arcade games of the 1980s – the people put on their HTC Vive and were immersed in a Formula 1 race on a track. They were shaken in all directions, with an audio headset for the sounds too. We had a lot of success with it…” 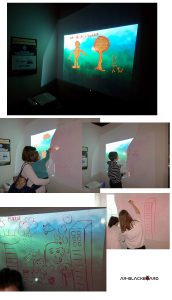 The last project from Nantes is an interactive installation that allows a whiteboard to become an area of physical simulation. Jeremy and Roger Lewis developed it, with Roger supplying the questions and answers: “What does it all mean? Simply that when you draw something on the board, AR-blackboard scans your drawing and creates a 2D virtual world based on it and then re-projects this world on the drawing that you made.” Jérémy readily admits, “When I saw a child go by, I would ask her if she wanted to draw a picture and obviously, she would accept. She would do what she wanted and from there, the game virtualizes the drawing. We could then move on what they had drawn, which creates a very new type of interaction with their drawings”.

More recently, there also have been fairs devoted to VR in Paris. Virtuality took place at 104 from last 24 to 26 February. Kristen Pire and Guillaume Robin (both from the class of 2019), whom we already encountered when they unveiled the POC of the HoloDeezer project at the Innovation Hub, were invited to deliver a talk not on VR but on the Augmented Reality headset that everyone is talking about, the HoloLens. 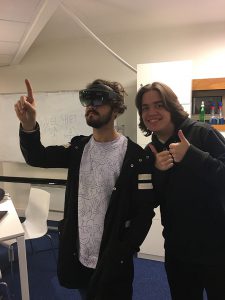 Kristen tells us about this new experience for him and Guillaume: “Guillaume and I were invited to ‘speak’ in the Accenture room of the fair on Sunday. It was a first for us, the first speech in such a pro context and in front of so many people. The title of our speech was ‘Microsoft HoloLens: a business tool?’ and aimed to present the ease of use of this technology, to present the extent to which A.R. and holographic technologies are no longer a fantasy of the 1980s or reserved for a technological elite.”

“Within 15 minutes”, continues Kristen, “we presented this technology based on our work on HoloDeezer, to show that if 4 students who had never touched it could come up with a pro result in just a few months, anyone can do it. Microsoft HoloLens is a technology that we really should not be afraid to handle. We were surprised to see so many people come directly up to us after our presentation. People who were curious about the technology, our work and our school”.

Getting down to work

Within the Epitech Innovation Hub, a project that will disrupt the working environment of developers is coming to light and creating a buzz: its name is Virtual Coding. Thomas Navennec, of the class of 2019 and resident of the Innovation Hub, along with Christian Chaux, Robin Milas (both class of 2021), Louis Giesen and Nicolas Jankovic (both class of 2019), started with an observation: “a lot of studies talk about it. In general, when developers sit down in front of their computers they take at least half an hour to get into the code… Not to mention the colleagues or project leaders, for example, who can come in and interrupt the pace…”

“Virtual coding uses VR to create a virtual work environment that makes you dive in directly and more quickly… With a headset on your ears, it’s perfect (smiles). We currently have a prototype, a POC with a wall that represents your computer where you can browse through your directory, with cubes you can click on. If you click on the file, it displays it on a kind of large screen floating in front of you. We have just finished the physics: we can, for example, take a file like a square and throw it into the trash to delete it.”

“The next challenge”, concludes Thomas, “is to be able to enter text in VR even though it has never been done – it is still very experimental. We are therefore going to test a lot of things to find out what works”. Experimentation – the basis of innovation.