#ProjectWeek is an inter-school event for the IONIS Group, which has a thousand students working together, coming from 3 of the group’s schools (Epitech, ISEG Marketing & Communication School and e-artsup) on 7 city campuses in France. #ProjectWeek 2017 was the fourth edition of the event. In 2015 La Poste Groupe provided the event’s theme of the “postman and mailbox for connected letters”. Last year Bouygues Construction focused on questions relating to sustainable urban development. For this year the group vente-privee has put its business concerns in front of the students’ analytical eye.

Teams of young multi-disciplinary students were put to work on 7 urban campuses connected to IONIS Education Group: Bordeaux, Lille, Lyon, Nantes, Paris, Strasbourg and Toulouse. They worked on a design-thinking problem, a subject directly related to their studies as well as their profiles from the fields of marketing (ISEG Marketing & Communication School), technology (Epitech) and design (e-artsup).  This pooling of specific skills was done to ensure the viability, reliability and desirability of the projects. During one week, the teams developed their ideas by meeting with mentors and experts who could offer them advice and show them good practices.

Ilan Benhaim, founding partner of the vente-privee Group and head of the group’s innovation strategy, just unveiled the theme for #ProjectWeek 2017 on the morning of March 13. Besides this multi-school “innovation operation”, the vente-privee group has joined forces with IONIS Education Group on a larger scale: in September Ilan Benhaim visited the IONIS Education Group Paris – Sud campus to announce the future opening of the Lab’ vente-privee.  “These young students will take on the task of stimulating innovation at vente-privee by creating POCs, meaning the well-known Proofs of Concept,” he explained. He is in charge of discovering the best French and European start-ups that specialise in the sectors of e-commerce and fashion, areas in which vente-privee has seen great success. “We look very closely at this ecosystem in order to always provide excellent services to our brand partners.”

Ilan Benhaim introduced the theme of #ProjectWeek 2017 to the students, entrusting it to their creativity and energy, while explaining the scope and objective of this mission to the students who were present at IONIS Group’s design and digital tech campus, Paris Centre, as well as those on the different campuses, via video streaming, “The objective of vente-privee is to increase online sales among its clientele and to optimise the conversion rate. To achieve this goal, you will propose a project that aims at developing or even reinventing the buying experience for vente-privee members, while taking into account the sales event aspect and their short durations (3 to 4 days).” 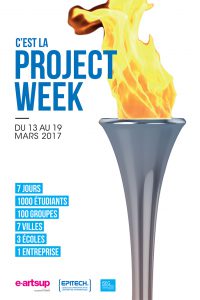 For the first 7 days of #ProjectWeek, the participating students first came up with an idea and then developed it according to the 4 focal points of the Business Model Canvas. This first stage ended on Sunday, March 19, a fateful hour that Epitech students knew as the important time when they had to hand in their projects. On Monday, March 20, the best projects were selected by the relevance of their value proposition, their originality and the thoroughness and practicality of their model.

Once this first review of the projects were completed, the chosen groups were informed that they would have had to work within the framework of well-known start-up methodologies. If the students from the Epitech class of 2020 still had questions, they could ask the students from the class of 2019, who were working at the same time on their EIP bootstrap for the Forward event (2 weeks of entrepreneurial creativity), and the class of 2020 was sure to receive a quick answer…

After working an additional week, the chosen groups were ready to stand before the critical, but kind eye of a pedagogic jury on Monday, March 27. 8 finalists were then selected to go into the finals of #ProjectWeek 2017 with a team from each city, except for Paris, which had 2 groups. They pitched the final version of their projects at the vente-privee Group headquarters in Saint-Denis on March 30.