The second Epitech Bootstrap Camp, our institution’s contribution to the IONIS Group’s Summer Schools programme, ended on Friday at the Innovation Hub in our Paris school. Following two weeks spent learning about information technology and programming languages, which most participants were not already familiar with, they were given a week to work in groups and put what they had learned into practice, by producing a prototype. They went away delighted, having been introduced to the “learning by doing” project method, a characteristic feature of our teaching here at Epitech.

Immersion in the methodology

Olivier Grandhomme, the school’s “International Mobility & Recruitment Manager”, reminds us that ”this year the students came from South Korea (Keimyung University), the University of Kent in the UK and China (Beijing Jiaotong University, with which Epitech has launched a joint programme, Ed.). They did a week of ‘Piscine C’ (immersion activities), a week of practical work on prototyping (with a morning on Arduino, a morning on Raspberry Pi, a morning on Flask, a morning on 3D printing…).

“The afternoons,” Olivier continues, “were given over to workshops, which included one on design thinking with ideation, an afternoon on IoT and connected objects in the broadest sense – their history, where we currently stand and where we are going. And an afternoon of reflection for drafting a design brief, drafting specifications for their prototypes, etc.”

Making makers of them

“They learned basic electronics, how to use a 3D printer, how to draw a circuit diagram to connect the components and how to create interaction with a mobile or web page, with a motion detector, etc. In short, all they needed to produce a prototype”.

“As a means of tackling rampant inactivity”, continues Pierre-Jean Léger, head of Operational Excellence, “our Chinese students came up with this: you put an object, in this case a smartphone, on a remote-controlled car. Then you set a time limit beyond which, if there is not enough movement from us, the car starts moving with the telephone on it, and so this movement forces us to move, too… They devised other programming methods, still using a motion detector. It was an amusing idea.”

“Starting from the assumption that when the alarm clock goes off, we tend to hit the “snooze” button and just go back to sleep, the second project will require a particular series of actions to be performed to turn the alarm off, which means that we are bound to be woken up”.

“The third project is a hygienic system for automatically opening and closing doors: people open them without any physical contact, using pre-set hand movements. This project reflects a very recent trend which is particularly common in hospitals. It is a practical application connecting a motor and a 3D motion detector.

“They really learned by doing”, adds Olivier. “The Chinese students, for example, managed to use a motor, although they didn’t know how one works. We sent them off to look it up on the Internet and we helped them along the way – all the staff at the Hub got involved. But, in the end, they worked out how to get it to work on their own”.

“I really enjoyed this ‘summer camp’, says Jean-Luc Sorak, a Computer Science student at the University of Kent. I learned about a lot of new technologies like Flask. I’d never used C or Python, either, so I learned three new languages… It’s really useful for me to keep on learning more. I’d say that at Kent, they teach us a lot about programming in Java, a lot of object-oriented languages, but not as much “hardware” as here at Epitech. 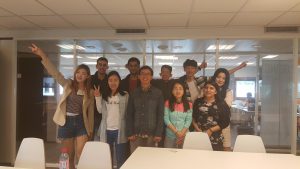