Last Friday, February 3rd, the second edition of Epitech Winter Boot Camp finished up. The first edition hosted Japanese students from Ritsumeikan University as well as Russian students from Saint-Petersburg University of Telecommunications. This year, there were ten Korean students visiting from one of the school’s partner universities, Keimyung University (KMU) while Luis Alberto Chavez Gallardo came from Pontificia Universidad Católica del Perú in Lima. It must be noted that the theme of this Winter Camp was indeed a big attraction since it was focused on the Internet of Things.

As it often happens, contact with the project method at Epitech always pushes students in the right direction and makes them love what they’re doing, the proof of which can be seen in the projects presented at the end of the Camp’s two-week session. But we’re getting ahead of ourselves…

Working in groups on different problems and even with unfamiliar programming languages can be hard to handle at first, but with this active/inductive method, the empowerment, as Anglo-Saxons call it, is quite clear. The self-confidence that the participants gain in less than 15 days is tangible. You only need to see the difference between the first day of the Camp, in winter or summer, when the International Relations team presents the programme, and the last day when the projects are presented. The difference is a bit like night and day… 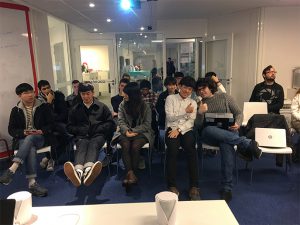 This year the students at Winter Boot Camp IoT worked and learned the basics in order to be able to “play” with a Raspberry Pi or an Arduino while initiating themselves in the Python language and learning how to use Bluetooth and WiFi modules, 3D printing and the rudiments of electronics (wiring and soldering). Aside from Luis, none of the students had used any of these technologies or languages before. 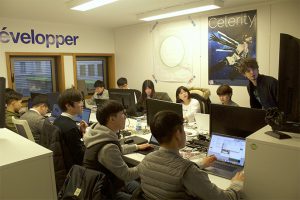 The students did not come to Paris to spend all of their time in front of a screen. They also visited different parts of Paris, such as the Eiffel Tower and even Disneyland, not to mention had a night out at a well-known wine bar in the Haut-Marais neighbourhood, all in moderation of course.

The 2 weeks of Winter Boot Camp came to an end with a presentation of projects conceived by the students. There were 6 different projects this year:

the first was an app that, via telephone recognition run through a Raspberry Pi, can authorise the opening of an apartment building door with keys,

the second project used an Arduino system as well as distance sensors and LEDS to create an automatic braking system that engages if there is a risk of a car accident.

the third project consisted of a system that could, for example, turn on music on a computer through the medium of a sensor, simply by moving a hand near the connected object,

the fourth was “Chicken in Paris”, a video game where you press a sensor to protect your chick from a cat. If you win, the chick becomes a chicken and then a cockerel,

the fifth project focused on participating in the re-launch of a classic Flash video game in a 3D environment with an Arduino,

The final project was the work of Wonjae Jung and Damha Kim, and it was definitely the project that made everyone smile. Named “Watchman”, it involved pressing on keypad-style buttons that were made with a 3D printer at the pace of Tetris-like shapes, which come down to bump against the blocks at the bottom of the screen, the “mirrors” of the keypad buttons. If you manage to keep up with the rhythm, you’ll hear the music… 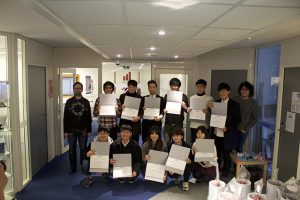 This principle is reminiscent of the game seen in the school’s Innovation Hub, Jubeat. It is not that surprising because in reality, Damha knows one of the Epitech students from Jubeat, Jérémy Dubuc (class 2015): “He was in my class two years ago when he came to do his fourth year abroad at Keimyung University…” It’s a small world. In the end everyone left Paris happy and in good spirits with their certificate, which confirms the adoption of the Epitech method.