BEFORE, DURING AND AFTER THE HACKATHON #HACKRISQUES

The Hackathon #HackRisques conference, organized by the French Ministry of Environment, Energy and Oceans, took place at Tank co-working space from November 18th to the 20th. This event was not like past events. The difference was the clear desire to prepare for Hackathon far in advance by launching the first steps of different projects, and in the same way, monitoring these projects’ downstream results in a way to guarantee their relevance and ensure they were fully carried out. Ségolène Royal, French Minister of the Environment greeted the winning project heads at the Ministry on Monday, the 30th. Some of these projects have already transformed into start-ups, such as the Safer project, which was the subject of a “meet-up” session on Monday, December 5th. This #HackRisques meeting was a bit like GreenTech Verte incubator in how it functioned.

From idea to start-up

To keep with this very distinctive characteristic, starting with an idea and going until it’s concrete, the prize for the projects on the #HackRisques podium, other than cash rewards, were periods spent in incubation. The Ministry of the Environment launched a program to open incubators that, just like GreenTech Verte, support innovative, environmental start-ups. The first space of its kind was inaugurated last September in the École des Ponts ParisTech. The next opening will be in Toulouse.

HackRisques began on Friday, November 18th, and was also a central conference for Public Innovation Week –the Ministry of the Environment is on the cutting edge of providing information to enthusiasts of public open-data,. As one of its representatives recalled, “through the enactment of the “Law for a Digital Republic”, a project led by Axelle Lemaire, which makes a major expansion of the boundaries of public data, we have the right kind of forward drive and focus for anyone who is interested in data and needs to develop innovative services centered on this kind of data.”

More than 110 data sets were made available to participants of Hackathon, along with a large amount of data relating to environmental risks: earthquakes, soil erosion, tsunamis, floods, etc. In addition to that, there was also a great deal of context data: population figures, buildings, housing, geography, etc. Including the sources of data coming from research studies, the data was provided by ministry partners and many others as well.

Just as the National Institute of Geographic and Forestry Information (IGN) brought attention to it, several data sessions followed by an upstream barcamp for this HackRisques helped to identify these data sets as well as the challenges to be faced on the last weekend of November. They all centered on the theme of natural risks: their prevention, population information, implementation of observation systems and decision-support tools for municipalities.

HackRisques brought together professionals, researchers, statisticians, geomaticians, and students from business schools such as EDHEC and obviously Epitech. All from the same Class of 2019, 11 of our students were present over the entire 48-hour period of the event. (11 of our students with Hadrien Blanc, class representative and HackRisques jury member) 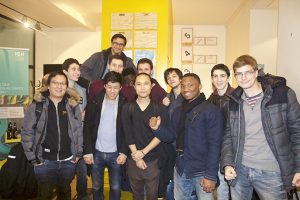 Stéphane Darcy, Kotokan Yapo and Nicolas Khenkittisak preferred to work as a trio: “because we’d been organizing our team for a long time,” Stéphane said. However they showed what they were made of, even receiving the highest score on the public’s applause meter. There were a lot of people on hand for the final pitches, even on Sunday night… The Spintank team’s top-notch hosting was certainly to thank for this.

Stéphane, Kotokan and Nicolas received special mention from the jury, and they were delighted with the experience, “we really learned quite a lot,” Stéphane replied, “particularly in the field of cartography. Since we had the data sets beforehand, we chose to do something related to theme 6, meaning mutual assistance among different people in the event of a catastrophe.”

“With our data selection on zones affected by catastrophes,” he explained, “by mapping them, we could locate all the people near the affected zones who could come help those people living in those areas. An example from the South of France last year illustrates this: in the stricken area, neighbors who were only a little affected or not at all could come help those who were, whether that meant providing food, clothing or blankets, offering transportation or whatever else.”

“We returned home Friday night, but starting on Saturday morning we had to rush. But we’re used to that with Epitech!” Stéphane said. For Corentin Magné: “It was a great Hackathon. I was part of the Safer project, a multi-discipline team with people from business school (EDHEC), geomaticians, etc. It was interesting to work and exchange idea with them. It was great.”

The Difficulty of the Task

A feeling confirmed by Emmanuel Moreau: “This Hackathon went really well. We had some trouble at the start. There were so many data sets. We needed to extract the data, sort it out, and process it correctly. In our team, we chose to used it in order to do some forecasting and provide a solution based on this prediction of flood risks and other anomalies.”

“I was the one who did the algorithm. I developed an ecosystem with some thirty different values in order to detect if this ecosystem suffered from any anomalies or not. Everything was totally connected with several multiple linear regression algorithms in order to have precision down to the hundredth place. If anything ever went beyond that range, it would be an anomaly.” (from left to right: Cyprien, Corentin et Antoine) 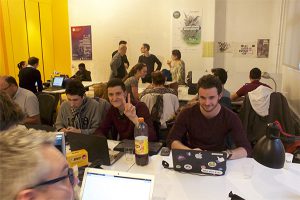 It wasn’t the project from Emmanuel, Oscar Nosworthy, Mamady Samassa (ENSG), and their teammates from the weekend that made it to the podium. But not getting a medal does not necessarily mean that the project is over. So it went for the Safer project, which Corentin Magné was a part of, as well as Antoine Mille, Cyprien Tonnelier, two students from EDHEC, and representatives from the IGN. The project received special mention for the jury.

Invitation to the Ministry

Safer followed the main point of HackRisques by turning an idea into a concrete start-up, with oversight and mentoring from Smart Life, which is, to use the expression from Philippe Eon (Director of Major Client Marketing at Orange Business), “a community of interests” and has Orange Business IGN, Météo France, and others working together. Safer was among the projects invited to the ministry on Monday, November 30th by Ségolène Royal, who was impressed by the number of innovative proposals by HackRisques.

The Prestige of the French Republic

Antoine put it in context: “We made a pitch in front of an impressive audience of mayors, prefects, and people from the ministry. We were congratulated by the Ministry of the Environment. It was great. It made a real impression to hear them, during the speech, only talk about different problems: floods, flood prevent action programs, etc., which Safer offers solutions for.”

They came back on Wednesday, December 7th: the three men are definitely ready for a challenge, and the school will provide the means for them to work on developing Safer as a Hub project at the school. In other words, they will also receive pedagogic rewards.

Philippe Eon summed it up: “with Safer, they merged and cross-referenced the data from INSEE, IGN, Météo France, Orange. With it they made an analysis of the population flux during crises to create, in a very simple way, a platform for mayors that will help them make the appropriate provisions and react with the proper responses.” When it becomes available to municipalities, we’ll talk about the Safer project again.