From EIP To Google Sunlights

Since the 2014 EIP Forum, the team behind Flat has come a long way. Today, this online music score publisher that lets people compose music together is the number one app in Google Hangouts, no less.
The fab 4
Never hesitating to go back to the drawing board – for instance overhauling nearly all their code in winter 2013/14 – Vincent Giersch, Corentin Gurtner, Pierre Rannou and Cyril Coutelier (class of 2014) caught Google’s attention.
Catching Google’s eye
As Pierre told us, “The connection happened through the soundtrack. Corentin contacted Google with some technical questions about implementing sound directly in a browser such as Chrome. Chris Wilson, a developer advocate at Google, then took an interest in our work.”
Amazing
“Vincent then submitted the Flat Hangouts app to the Google team in charge of developing the video chat service. An engineer got back to us to ask for our application ID so he could test it. In the following hour, several engineers connected in a Hangouts bubble to test the collaborative aspect in real time and the application as a whole. Their response was: we’re really impressed!” To try it, click here.
An identified market
“We then thought about the relationship between the total population using the Goggle Hangouts application and the very low number of compatible applications on offer… We then sent an email to Google to get as much information as possible about these various points and ask to be listed in a variety of places.”
Bingo
“They agreed to give us “featured” status, meaning that we’re highlighted in the Chrome store and are among the 15 suggested applications in Google Hangouts.” 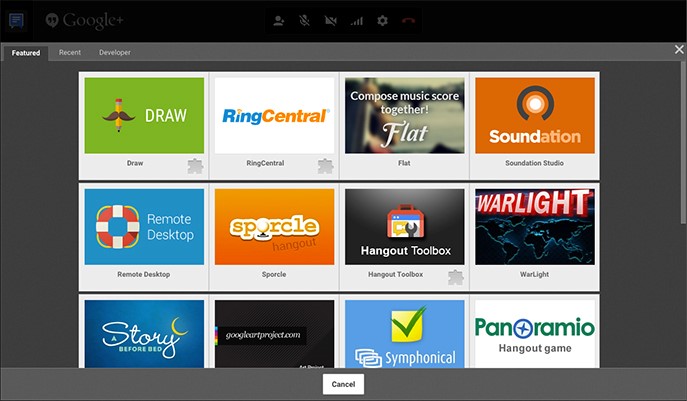 The traction of Flat
“Following the publication of Flat in the Chrome store, we noticed a high number of downloads. Within this massive influx of users, we noticed many similar e-mail addresses, which we identified as belonging to teachers in the United States.”
Growth hacking
“We found out about the organisation of “district schools” in the States to learn more about how to drive take-up through this channel. Over there, all students have a free Google app account. They are then tagged as being within the education domain, which has a slightly different offering from the Chrome store for the general public. That’s why we were keen to ask Google for the “Education” label.”
A targeted target
“We have a pretty crazy amount of entry points on campuses and other educational organisations… I’d say that we get about ten every day in these circles.”
Figures
“In early January, we had 500 users, mainly from American universities, so these are qualified users. Many of them are the ones (70% of sign-ups) who spotted us thanks to the Chrome webstore. And people come back and write to us too, which is the most important thing. In mid-March we had 3,500 users. Today, we have over 10,000 with over 1,000,000 notes already scored…”
Google is smart
“Encouraged by this growth surge and by our user feedback, we decided to carry on integrating Flat into Google products. Surfing on Google products is totally in keeping with our vision: facilitating collaboration and exchange between individuals. And obviously this is a good way to confirm our traction.” 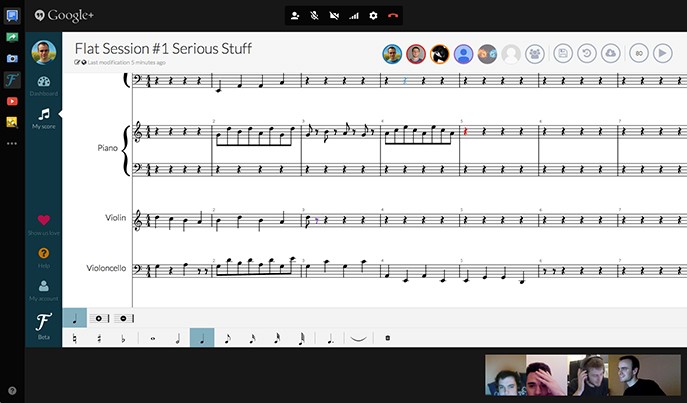 French Frenzy
“We came up against a few technical difficulties. In particular there was a compatibility problem integrating Google Drive while using Hangouts. We are working with them on this issue to remove this limitation and thus provide our users with the best possible experience.”
The Social Network
“Eventually we physically met with Chris Wilson at the Web Audio Conference which took place in Paris. It’s also where we met Paul Adenot. Paul Adenot is a big name in the field of Web Audio API – which makes it possible to process sound directly in the browser. Corentin is the team member in charge of following this up, and is giving it his full attention.”
MusicXML and MIDI
The MusicXML format is a standard used by over 200 programs to store musical information. We are obviously watching this format very closely and implementing it day after day – paying special attention to visual rendering and drawings of musical symbols to ensure that our interface remains aesthetically pleasing. The same goes for the MIDI format: tomorrow on Wednesday 15 April, we will be offering that too.”
Lean startup
“This doesn’t mean launching a release really fast. On the contrary, we want to stay in beta mode for as long as possible. The TheFamily accelerator is helping us in terms of lean startup education. We gather user feedback every day and iterate by the day or by the week. As soon as we spot a breakthrough, we very quickly submit it to our users to approve our choices/designs/implementations. This is our method for all the features released for Flat.”
Timing
“A mobile app? Not necessarily for the time being, especially since we ourselves are scattered across several towns in France and China, so it’s not easy. But when I see all the potential we have, just with the web app and everything relating to it… We’ve set ourselves a target of 60,000 users by the end of June.”
One thing’s for sure, Flat.io’s growth curve is anything but flat.